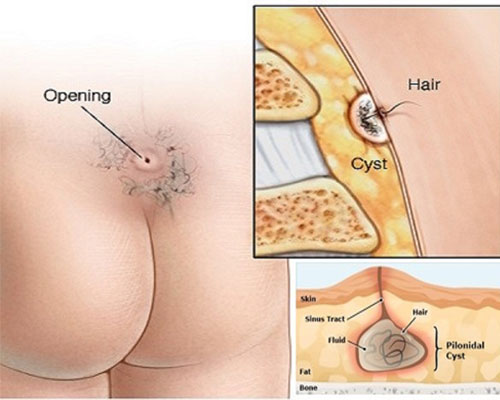 What is pilonidal sinus disease (PNS)?

A pilonidal sinus (PNS) is a small hole or tunnel in the skin. It may fill with fluid or pus, causing the formation of a cyst or abscess. It occurs in the cleft at the top of the buttocks. A pilonidal cyst usually contains hair, dirt, and debris. It can cause severe pain and can often become infected. If it becomes infected, it may ooze pus and blood and have a foul odor.

A PNS is a condition that mostly affects men and is also common in young adults. It’s also more common in people who sit a lot, like cab drivers.

What are the causes of pilonidal sinus disease?

The exact cause of this condition isn’t known, but its cause is believed to be a combination of changing hormones (because it occurs after puberty), hair growth, and friction from clothes or from spending a long time sitting.

Activities that cause friction, like sitting, can force the hair growing in the area to burrow back under the skin. The body considers this hair foreign and launches an immune response against it, similar to how it would react when dealing with a splinter. This immune response forms the cyst around your hair. Sometimes a person may have multiple sinuses that connect under the skin.

You may not have any noticeable symptoms at first other than a small, dimple-like depression on the surface of your skin. However, once the depression becomes infected, it will quickly develop into a cyst (a closed sac filled with fluid) or an abscess (a swollen and inflamed tissue where pus collects).

The signs of an infection include

You may also experience a low-grade fever, but this is much less common.