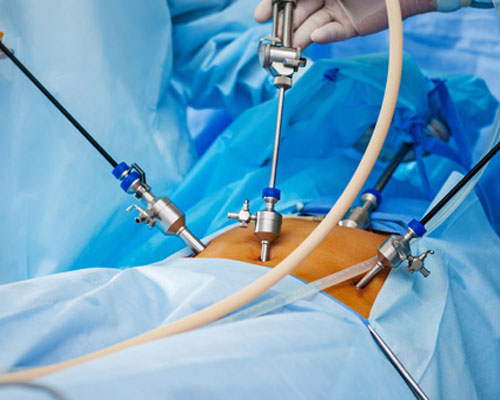 Advanced Laparoscopic Surgery Laparoscopic surgery is often referred to as minimally invasive surgery. Laparoscopy utilizes small (1/2 inch or smaller) incisions instead of the large incision used in traditional open surgical procedures. Through the small incisions trocars (pen shaped tubes with a valve) are inserted into the abdominal cavity, which is inflated with carbon dioxide gas to create space between the internal organs and allow visualization and organ manipulation. One of the trocars is used to allow access for the video camera, whic also has a built-in light source.
Today, most modern laparoscopic systems provide high definition image quality and the surgeon and the team view the procedure on a separate video monitor. These systems provide outstanding visualization and access to anatomical structures that are otherwise only accessible via large incisions that may extend to the back or the chest.
The surgical instruments are inserted through additional trocars. The laparoscopic instruments are desined to fit through the thin trocars yet provide similar efficacy to their traditional counterparts. This approach is considered less invasive because it replaces the need for one long incision to open the abdomen. The number of incisions and trocars depends on the complexity of the procedure.